In 2008, a mother of two young sons had been abandoned by her husband, and she supported her children by working as a house cleaner in a large home. 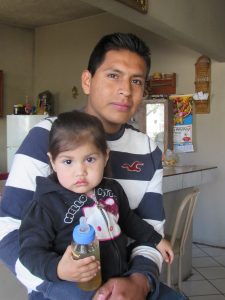 She became very ill, and was unable to work enough to support the boys and herself. The owner of the home said that she could continue to live in the house while she recuperated and continue to work as much as she could. But the homeowner was adamant that she would have to find somewhere else for her sons to live. The mother came to La Gran Familia and inquired about bringing her sons to live there and receive their education.

Both boys, Guadalupe and Ricardo, were good students, and both absolutely loved to play soccer. They soon accumulated a large number of trophies and medals from their soccer successes. Ricardo, the younger of the brothers, is still part of LGF, and he is now in Mexico City as part of a professional soccer team, Las Pumas. The team has supported him as he finishes high school, and he is at the highest level of their farm team. He has a bright future ahead of him as a professional soccer player.

After 2½ years with the Pumas, Ricky tried out with a similar pro team, the Bravos, of Ciudad Juárez, so that he could be closer to home. Making the team, he will finish his last semester of high school in Ciudad Juárez. He turned 18 in August 2019 and he plays well enough to play with the 20 year olds. At age 20, he will begin to receive a salary. He continues to be a very good student, and if the soccer career does not develop, he will do well in the University.

The older brother, Lupe, stayed at LGF until he finished high school. He had fallen in love with one of his classmates, Aracely, and they married soon after graduation. They now have two children, Chelsea who is two, and Itzel who is one. He works in the warehouse of the Lala milk company. Recently he wrote, “I am proud to have lived in La Gran Familia for eight years. My brother, Ricky, is fulfilling his dreams of playing professional soccer that we both shared since we were little boys. I was unable to follow this dream, because I chose to start a family.” He also said about his time at LGF, “I was able to learn true life values and was fortunate to know that there are people who support noble causes without any desire to receive financial rewards. A person can repay financial loans, but to people that treat you kindly, you are indebted forever.”